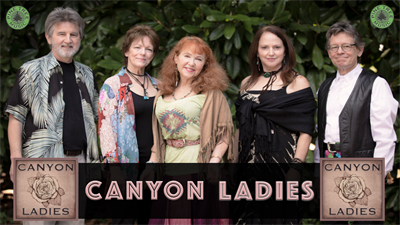 Canyon Ladies is a tribute to the women singers/songwriters who were such an integral part of the Laurel Canyon music scene that flourished in the late 1960’s and 70’s. Among these wonderfully talented women were Joni Mitchell, Carole King, Linda Ronstadt, Emmylou Harris, Bonnie Raitt, Judy Collins and others.

At the core of Canyon Ladies are three women; Berné Poliakoff, Susan Bennett and Margot Bernstein. They are joined by two stellar musicians, guitarist Rick Hinkle and drummer John Lewis.

Berné (vocals) has performed as a member of Cowboy Envy, Back In The Saddle, EZ Credit Jazz and also performs solo with guitar. She has toured extensively at major venues and festivals and won numerous awards. (WMA best harmony vocals, twice.) She is a very accomplished songwriter in her own right. Susan (vocals, keyboards) also enjoys a stellar career as an actress, voice talent,(she was the original voice of Siri) and musician for tv commercials, jingles and live performance. Margot (vocals, guitar) is an accomplished musician, teacher and songwriter. She has performed professionally since her teens; as a soloist with guitar, as a member of choral ensembles and as a vocalist with jazz groups. Great songs, beautiful harmonies, stellar musicianship and a very memorable concert experience. That is Canyon Ladies.

COVID-19 Update: Some events and festivals may be canceled due to escalation of the situation surrounding COVID-19. Click here for more updates.